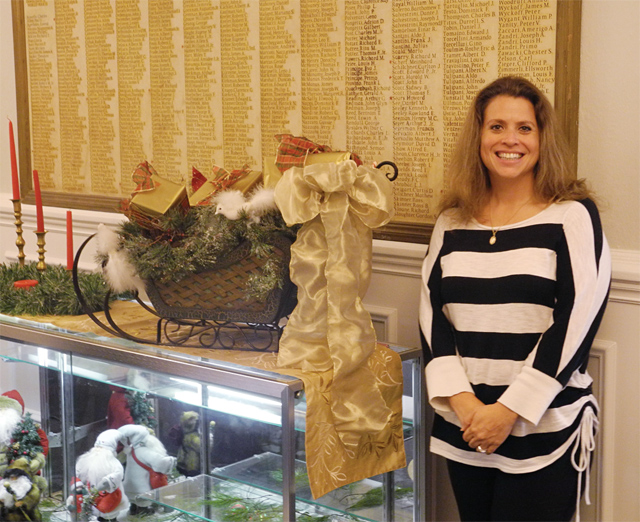 Laurie Scholl, the town’s human resources director, was named Employee of the Year last week. Ms. Scholl, who has worked in town for over 13 years, lives in Bethel with her fiancé. —Steve Coulter photo

Human resources, the backbone of any organization, often goes overlooked and underappreciated.

Not this year though.

The town has awarded human resources director Laurie Scholl with the honor of Employee of the Year.

“There’s always a new challenge — no day is the same — and that’s what makes my job neat,” she said. “You’re not just in human resources, you’re a part of how the whole town functions.”

When asked what makes working in Ridgefield so worthwhile, Ms. Scholl is quick in her response — the people.

“It’s an amazing place to work — the people know they have a job to do and that’s what they do first,” she said. “I’ve worked in the private industry doing HR and it’s nothing compared to working here.

“It’s a community and it’s a family,” she added. “People who work here work really hard and they like what they do and take pride in it.

Ms. Scholl, who has been with the town for 13 and a half years, has worked in human resources her entire career, starting at Novartis Pharmaceuticals before moving onto work at Grolier Publishing.

Her favorite part of her job is hiring someone and seeing the person transition into their job.

“Choosing people based on personality and skill set is really neat, but when there’s a perfect fit that’s my favorite part to experience,” she said.

The application process isn’t easy and can be time consuming, she admits.

“The timing of it depends on the job,” she said. “It could take a month, it could take longer.

“Unless there’s the always the once-in-a-while situation where we find someone really quick or we have someone apply from within the town looking to make a department switch,” she added. “In those cases, we’re really lucky because they know the town and we know the person.”

Despite the sometimes-lengthy hiring process, the job has had produced many highlights over the years in Ridgefield, including overseeing the teen center staff, the Parking Authority patrols and hiring bus drivers for the SPHERE bus.

“We’ve added to my job throughout the years,” she said. “It keeps getting bigger and bigger and it’s been great because I love taking on new things.”

The highs she gets from her job are intertwined with the challenges she faces, such as the getting insurance costs down in the town’s budget and negotiating union contracts.

“We’ve been very successful on our side at making sure we get quality health insurance for our employees while saving the taxpayers money,” she said. “We’ve come up with new and unique plans for that and it’s something we’re very proud of.

“It’s always a bit contentious around contract time,” she said. “In the end though, nobody walks away too thrilled about it but we do walk away from it respectful of each other.

“We don’t have all-out wars like some of the private places have.”

Like many past winners, Ms. Scholl, who lives with her fiancé in Bethel, had no idea that she had received the award until the town’s holiday party on Dec. 19.

“I was pleasantly surprised — shocked really,” she said.

The town has a committee — headed by Mr. Marconi, the town’s assessor Al Garzi and the town clerk Barbara Serfilippi — that decides who gets to be named employee of the year.

“They go through all the nominees and make a determination, then they announce it at the holiday party,” she said, familiar of the process. “It was totally unknown to me that I was the winner; I went in blind, but I am very honored to be awarded this year.”