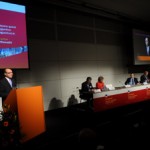 A human resources development strategy, with emphasis on the creation of professional skills, would be the appropriate response to the challenges related to the risk for social exclusion of the Romany minority, while a strategy steered toward the stimulation of a Romany middle-class would help overcome many preconceptions, including self-exclusion factors, such as the refuse of the Roma people to identify themselves as Roma, Romania’s President Traian Basescu said Friday in Brussels.
‘National governments do not have either the information or the means to implement specific programmes; they can only implement general programmes that on site prove difficult or impossible to implement. The local administrations are the link between the community expectations and the action guidelines and resources available nationwide (…) I believe a Roma strategy will only be successful if Roma assimilate the principles of citizenship as life principles in the European society, without such principles affecting their cultural traits that define their ethnic identity. Consequently, any credible strategy should comprise openness to dialogue on the part of the majority (…),’ Basescu told a European Roma forum in Brussels.
Basescu showed that to a disproportionate extent Roma continue to live on the edge of the contemporary society, exemplifying they are early dropouts from school and follow a life trajectory patterned on a pre-modern model. President Basescu also said that a great part of the Roma who have succeeded in getting integrate, having become engineers, doctors, teachers, politicians or business people, no longer recognise their ethnic background. And this self-identification issue, the Romanian head of state said, is because in the relationships between the majority and the Romany minority there is a persistent atmosphere of deep distrust fuelled by prejudice.
Basescu was the only head of state or government attending the summit and having a brief meeting with European Commissioner for Justice, Citizenship and Fundamental Rights Viviane Reding before leaving Brussels. ‘The president was there, Romania is part of the solution, not part of the problem, this is my message and now this message must be turned into reality’, she added. According to the commissioner, she and Basescu did not discuss justice-related issues, which Ms Reding stressed she constantly discusses with the justice minister.
Also present at the European Union Summit dedicated to the ethnic Roma citizens, Minister of Labour, Family, Social Protection and the Elderly Rovana Plumb said the social inclusion of the Roma has been for long a priority of the Romanian Government, and the country’s commitment to this matter will remain strong. ‘Romanian authorities organize job fairs to stimulate the Roma employment. Over 1,000 citizens were employed through the project ‘Program 140’, implemented with European support in the Roma communities’ said Rovana Plumb.
In his turn, governmental adviser on the Roma problems said the attitude in the Roma communities has change, many of its representatives reaching the conclusion that they ‘shouldn’t wait with their hand out’.