The former human resources minister should not have consented to in-house unions according to the bank employees union. 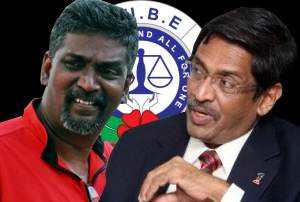 KUALA LUMPUR: National Union of Bank Employees (Nube) is disappointed with the actions taken by former Human Resources Minister Dr S Subramaniam when he was in office.

The union today said that Subramaniam’s credential as the Human Resources Minister was tarnished when he favored the formation of in-house unions.

Subramaniam who is also MIC deputy president was Human Resources Minister from March 18, 2008 until May 5, 2013. He is currently the Health Minister and Segamat MP.

Subramaniam gave approval to the formation of in-house unions in Maybank which was detrimental against Nube in 2010.

“What is the intention of the Human Resources Ministry? They were trying to divide and weaken the union when the minister is empowered to cancel the registration of the in-house unions.

“We were forced to spend RM2 million in legal fees over a period of two years to fight off the registration of the in-house unions,” Solomon said.

Solomon added that Subramaniam also declined to meet Nube officials to discuss issues related to bank employees during his tenure back then.

Nevertheless, Nube has no complaints against the current minister, Richard Riot Jaem.

“He has not made any detrimental statement against Nube. We hope he is fair to us,” said the Nube leader.

He added that Nube has written a letter to meet Riot and hopes to convey “our side of the story instead of his biased officials”.

Readers are required to have a valid Facebook account to comment on this story. We welcome your opinions to allow a healthy debate. We want our readers to be responsible while commenting and to consider how their views could be received by others. Please be polite and do not use swear words or crude or sexual language or defamatory words. FMT also holds the right to remove comments that violate the letter or spirit of the general commenting rules.

The views expressed in the contents are those of our users and do not necessarily reflect the views of FMT.