Faculty or staff members with complaints about work now have someone to go to in their office besides their boss.

For the first time, human resources representatives are now embedded in nearly every school and many large departments to act as mediators between administrators and employees. The system, which is common across higher education, is part of an effort to improve the University’s often criticized handling of workplace complaints. 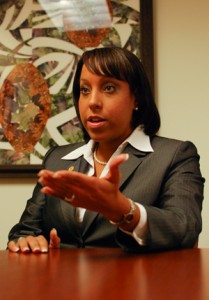 She said she wants all representatives to give employees “good, accurate and objective advice on what their next step should be,” which can mean filing official complaints or having a conversation with their boss. Each of the about three dozen representatives will also help with staffing and hiring decisions, she said.

With one person overseeing each area of the University, Ellis said the Office of Human Resources could also have a clearer picture of how complaints are resolved.

In past years, those who dealt with complaints did not have a human resources background, but the new representatives are trained to handle situations from firings to growing offices, Ellis said.

The recommendation came from the University’s Freeh Report Task Force, which assessed GW’s practices and looked for problems that could lead to a breakdown in procedure like during Pennsylvania State University’s Jerry Sandusky scandal.

But the system may not encourage more employees to bring up complaints about their workplace, a former administrator said, because some human resources representatives report directly to the leaders of those offices.

John Lombardi – who is suing GW because he said he was fired in retaliation for going to the Office of the General Counsel with a complaint – said he first sought help from his human resources representative.

“They were right in the middle of the cross-hairs in both departments, which were sometimes in conflict with each other. I think that’s part of it,” he said.

David Marshall, a former staffer in the Graduate School of Political Management, said he was fired last summer by the school’s leader for being gay. When he brought his complaint to Human Resources, he was denied a formal grievance hearing, he said.

Ellis said in most cases, the representative reports directly back to the human resources office, “but not in all.” University Spokesman Dave Andrews declined to say which departments or schools do not have that system, saying “we prefer not to single out any individual schools.”