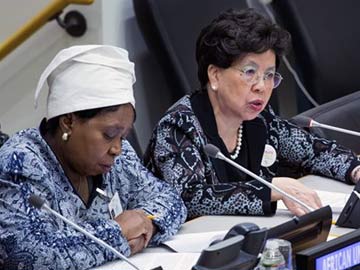 Paris:  African Union chief Nkosazana Dlamini-Zuma said on Monday that Ebola-hit nations needed more doctors and health workers to help “break the cycle” of the virus, which was devastating their economies.

International aid is pouring into Liberia, Guinea and Sierra Leone, and the United States is sending up to 4,000 soldiers to help train health care workers and build medical facilities.

But Ms Dlamini-Zuma warned that without doctors, this would not be enough.

“Infrastructure alone is not going to solve the problem,” Ms Dlamini-Zuma told the International Economic Forum on Africa in Paris.

“What we can see is still a gap on the human resource side, they don’t have enough health personnel, some of the health personnel have succumbed to the disease,” she said.

“We need more human resources in order to really break this cycle of Ebola.”

The epidemic, which has killed more than 3,300 people, according to the World Health Organisation, has crippled already weak health services in West Africa.

The World Bank has also boosted its aid to the campaign by adding $170 million toward expanding the health-care workforce and buying much-needed supplies for care and treatment.

Cuba has sent 160 health professionals, but aid organisations are pleading for countries to send more doctors.

Doctors Without Borders, the global aid agency leading the response in west Africa, has also criticised the inadequacy of international aid, saying it desperately needs medical teams rather than cash.

With average growth projected at five percent in Africa in 2013, an envy-inducing figure to lagging European economies, the Africa Forum is looking at how to industrialise the continent and improve access to global and regional markets.

However both the World Bank and IMF have warned of the catastrophe the Ebola virus poses for the countries battling it, whose growth outlook has plummeted in recent months.

“Today we would be a bit more confident if Ebola wasn’t on our continent,” said Ms Dlamini-Zuma.

“The three countries which are affected are countries that were really turning the corner from having had conflicts and so on and they were doing well.

“It hurts us that now” that their development is going to be stunted, she said, highlighting that the outbreak had shown that health and education were “as essential for economic growth as anything else.”